Surprise at the beach

Photo quote for today:
"There is no such a thing as artistic photography. In photography, like in all things, there are people who can see and others who cannot even look."-Nadar

Today started off with a bang! A huge thunderstorm came through the area last night dropping copious amounts of rain, and according to the local news over 3,000 lightning strikes in the first hour. I guess this is why this area is known as the lightning capital of the country. I knew from previous experience that it would make for good shooting at the beach, and in my upcoming posts I'll share some of those panoramic images. The icing on this morning's shoot came as I was leaving, my panoramic images were in the camera, I had also spent some time with the gulls as they played in the rain water that flooded parts of the beach, and was heading to the parking lot when I decided to change my exit route. As I walked back to the beach to choose another point of departure, a pair of Roseate Spoonbills landed directly in front of me and made their way to the same area as the gulls that I had just wrapped-up photographing. Never having had an opportunity to capture any images of these birds I set-up and began shooting. They're considered rare, even in this area, and by the time I left they had started to draw a crowd. Here are some samples from today's work. 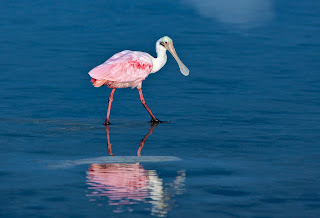 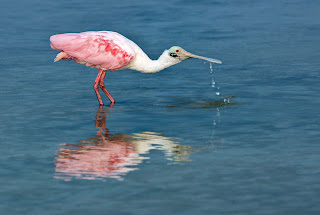 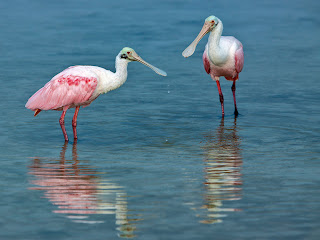 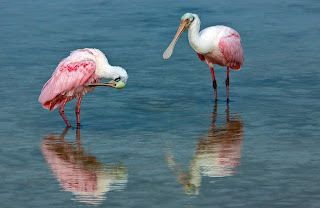 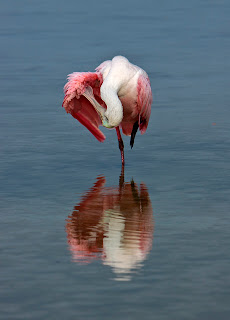 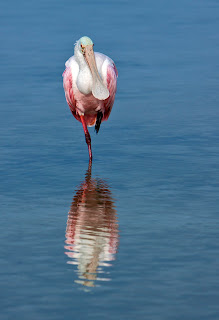 Choosing a different route paid off. Love the different behaviors. I look forward to seeing your panoramic images.

Your Roseate Spoonbills are brilliant as are your images of them.

Many thanks for your support on Birds2blog, it is much appreciated Mike.

oh my gosh, what a lovely subject and the colors, pink and white...one day hope to see a Roseate. I must say that even your black and white shots have so many shades in them they are color to me.

Thank you John, Pete, Frank, and Nora much appreciated.

I am in awe of your stunning photographs of the beautiful Roseate Spoonbills! So very lovely. Terrific behavior images, too. Outstanding work!

Nature in the Burbs said...

Great shots. What a find!

These photographs and fantastic Mike, they're the sort of photographs that stay in your head forever.

Mike
Though I now make my home in Sarasota, Florida, I'm originally a Maine native. I've been capturing images of Maine, New Hampshire, Vermont, Florida, Western U.S, and Europe for over thirty-six years. Whether hiking, on my skis or snowshoes, or in my kayak, my camera is usually never far away. My basic photography interests are nature and landscape, but will never pass-up an opportunity to photograph whatever catches my eye. I've displayed my work in galleries and shows throughout my original home state, New Hampshire, Massachusetts, and now here in Sarasota, and have had work appear in the pages of publications such as Maine Fish and Wildlife, the calendars of Down East, Maine Geographic, and Maine Scene. I was also selected and showcased in Nature Photographer's Annual Review, titled “In Celebration of the Earth”, a review of both amateur and professional photographers from throughout North America. Like many photographers, I started out with film and have now made the transition to digital. I really enjoy the flexibility, creativity, and control I have over the final image, and want to share that result with the viewers of this blog.